Map of route. A data glitch cut off the last two miles

It took us over a month to let the memory dull of the steep descent that would become our first ascent.  But a cool morning in June found us back on Highway 6 at the random trail sign that marked the end of Day One, heading back up.  As seems to be usual, the anticipation was worse than the reality.

We looked up at Centennial Cone from our smaller peak, congratulating ourselves on our foresight.  We pulled out the maps to check our options.  As usual, we had two: straight down and back up, or across and circuitous. We could see from our vantage point that down and up would be hiking across an open grassy field, where across would be rocky brushy terrain.  Down and up also featured a trail, which of course was against the rules.  I made a snide remark about the intelligence of our rules committee.

We made our way across.

“Side hilling” as it’s known is not necessarily easier than regaining lost altitude. I would argue it absolutely is not.  Imagine trying to walk across a wide stairway, never touching the horizontal part of the stair. Now imagine half the stairway is loose and wobbles threateningly when you step on it.  Now add in some brambles, and you get the point.

End of the side hilling

Wes was in heaven with the scrambling that bordered precariously on Class 3 (hands and feet required).   I carefully tested each hand, foot and trekking pole hold as Wes practically danced from boulder to boulder.

Trekking poles was another difference in our hiking: Wes has absolutely no need for them, whereas I am pretty sure I would die a horrible death without mine.  In May, I ran a race that expressly forbid them.   Not just a note in the list of many a rules that I could pretend to have not read, but a one liner that had to be electronically initialed.

Part of that line was another, much much worse, exclusion: music.  I hike with music. I run with music.  I work to music.  I fall asleep to music.  I”m listening to music as I write this.  I love music.  I have a theory that I refer to as The Hollywood Theory.  This theory states that nothing bad ever happens when happy music is playing.

So far, it has proven to be absolutely true.

My hand trembled on the keyboard as I agreed to no trekking poles and no music.  No good could come from this.

I survived the race, but have refused to be without my poles since.  Music too. Except with Wes.   By far the most interesting person with which I’ve had the pleasure to hike, I’m willing to take the risk of no happy soundtrack playing.  It’s hard to find a good hiking partner.  First you actually have to find someone who wants to hike.  Then you have to agree on all aspects of said hike: start time, finish time, distance, elevation gained, on trail or off, pace, and, my number one Rule of Hiking: running like a bat out of hell whenever there’s even a hint of lightning in the area.

Wes owns his own business. He’s been in the business of buying and selling banks for over thirty years.  It sounds boring and if I tried to relate it, it would most definitely be, but Wes makes it more fascinating than trekking the Himalaya. He’s in the process of selling his business, and even that has a bit of the drama of a good Hollywood thriller.

I saw Wes sitting on a rock outcropping in front of me.  “Well, we lost that gamble”, he said. Straight ahead was impassable, pretty much a straight drop down, which meant we got the worst of both worlds. Side hilling and we’d still have to lose and regain the elevation.  So down and back up we went to our first official peak of the day, and the true starting point of the day.  Two hours into it and we were just getting started.

The crux of this day was crossing Clear Creek. The snowmelt had the creek running high and we had one place to cross–a small bridge that we carefully inspected before beginning the hike, for fear it wouldn’t actually be passable.  We would have to cross Highway 119 as well, which of course made our current little down-and-up laughable.  We would end up at our beginning elevation only to go back up to higher than our previous peaks.

The road from the west parking lot of Centennial Cone park would take us right down where we wanted to go, but of course that was against the rules.  The down was almost worst than the first day. The growing spring plants made it challenging to see where to step.  Somehow, Wes managed to find a small animal trail.  Then we hit a steep gully that took some gymnastics to get out of.  All this was made even more challenging by the private property.  Another trait I’ve learned to admire in Wes is his sense of respect. Many peaks in Colorado are private property, or require passing through private property. I have alway naturally assumed that either you asked permission or just did not climb them.

This is not the case.  Many peakbaggers have a surprising sense of self entitlement when it comes to peaks.  I suspect they would not have the same attitude if the tables were turned, but maybe that’s my cynicism speaking.  Wes, when planning his peaks, sends letters asking permission before climbing.  Most times, he gets the okay–I imagine the landowners are too surprised to say no.  We had agreed that if any of the peaks we passed were on private property, we’d get as close to the summit as we could and call it good.

We unfortunately were not able to completely avoid private property but did our best to reach the road as quickly as we could. When it came to conflicting rules, we opted for the most respectful approach.

With the traffic to and from the casinos, crossing 119 was quite possibly the most dangerous part of the day, although the decaying bridge across Clear Creek didn’t exactly inspire confidence. Much like snow in the winter and scorching temperatures in the summer, we knew the steep uphill was coming and we complained anyway.  We bent the trail rule and followed what we decided was an animal trail up to our next peak at 7600ft: people are animals too. 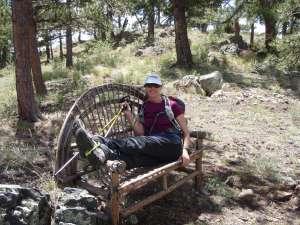 The things you find

We stopped for a break.  The temperature was much warmer than either of us had anticipated and the water we brought was turning out not to be enough.  Even though it was June, this was my first hike of the season with short sleeves. I had forgotten how much the heat can take out of you.  It’s not just the heat, but the heaviness of the backpack.  All the clothes you’re usually wearing are now weighing down on your hips.  Okay, technically, the weight is same, but somehow the distribution seems to double it when it’s in the backpack.  At least the diminishing water supply was helping the weight issue, a small consolation.

I refuse to complain about the heat just yet.  It was a long winter.  The first snows were in September and the storms were still going strong in May.  I’ve gotten used to the cold and I’ve grown quite adept at dressing for it, the perfect combination of layers, all the periphery items–windproof hat, gloves that are warm but don’t have to be removed to eat or drink, my favorite balaclava, even the ideal pair of socks–but there is still nothing like the freedom of donning nothing more than a t-shirt and shorts when heading out the door.

We couldn’t quite see the rest of our day from this point–we had another ambitious day planned.  We had parked my car at Kermits, this classic American roadside bar and restaurant at the corner of I-70 and Hwy 6.  It has recently re-opened (under a different name, but Kermits just fits) and was hopefully popular enough to stay that way.  Bikers seemed to make up the majority of clientele.   It definitely had character.  Wes and I had already agreed that a beer and hamburger would be the perfect ending to Day Two.

What we hadn’t anticipated was the pull of that idea as the temperatures climbed and the miles mounted.

As we made our way to Floyd Hill, the peak after which that area of I-70 was named, we decided to forego the last mile or two of our planned route.  We reasoned that Floyd was an easy enough peak to reascend. It was also a logical exit point, as continuing would commit us to at least another mile before another exit point would introduce itself.  With Clear Creek still on the same side of I-70 as we were, we also could not guarantee an easy egress further up.

But really, it was the beer.

Floyd Hill is a bit of an endangered peak.  There is a significant mining operation encroaching on it.  It made our last downhill a bit of a challenge.  Wes was sure if we were found on the property, we’d be given honorary hard hats and a personal tour, due to our amazing and impressive journey.  I more envisioned special bracelets and a tour of another facility, one that was in all likelihood equally as dreary.

The beer, hamburger, and, oh yeah, french fries too, ranked as the best I’d ever had.  Wes and I toasted the day and spun tales about the magnificence of the next day on the Long Lonesome Trail. 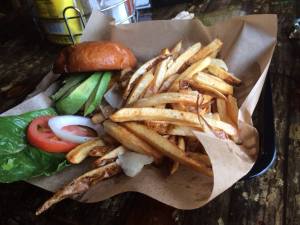