I froze on my precarious perch. I was afraid to turn around, as much from a fear of falling as from what I might see. What I didn’t see–a gun–gave me great hope.

Wes and I had gotten into a groove. Meet at the start point, drive separately to the end point, using the map to determine where we needed to park, find a nice quiet spot and park, drive back and begin the adventure. 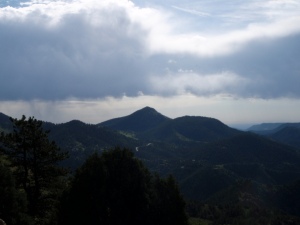 Morning in the mountains–and a promise of rain

Day three found us back at Floyd Hill. The hike up seemed almost easy as we once again skirted the mining operation. We were heartened to feel like we were gaining new ground almost immediately. It was looking like a fun day.

We’d have to cut it short because Wes had to be back for family commitments. The forecast was also looking a little wet, and on the high peaks is not where you want to be if that happened.

To gain the ridge that was our goal for the day, we had to cross through the mining operation–or rather, that was the shortest route. To our surprise, there was someone there on a Sunday, but he just gave us a wave and we continued on our way. I guess in the grand scheme of things, a sixty-something and forty-something hiker were not high on the scale of threatening objects. This was a definite advantage as the next miles crossed a lot of private property. 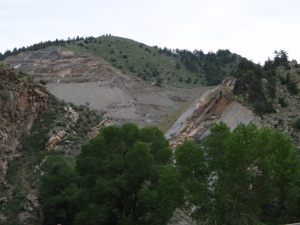 The mining operation at Floyd Hill

The miles also followed the Clear Creek/Gilpin County boundary. This was our fun find of the day: old stones that marked the boundary, carved with numbers. The numbers corresponded to the numbers on the map, giving us a good reference to our location.

The early days of mile markers. Can you imagine carving all of these?

With the sale of his company now behind him, Wes was working on another big project: a book on the history of Colorado relating to geography and the gold rush. I wish I had a recording device as we hiked. Geographically speaking, Denver is not the most ideal of locations, and it was relatively late when people finally built roots here. The native Americans weren’t terribly in love with it, and the early settlers had all kinds of weather and geographic challenges, with snow, flooding, and other natural disasters.

But humankind is a stubborn lot, and, of course, there was gold involved. We were pretty sure our current route, probably not much touched since those stones were erected, was a main thoroughfare for the gold rush lot.

It wasn’t long before cartographers were trying to map the incredible mountain range. Not many of the early maps matched each other. In a tale of history repeating itself, the map company with the best political connections won. It would be many years before it was all sorted out. Much like today, maps were used by everyone, inexpensive and rather useful, but I would guess survival more than pleasure drove the sales.

Our route took us across Central City Parkway. Our next day on the High Lonesome Trail put took us across Virginia Canyon Road. It was quite the contrast between the two routes. Although I know intuitively that we are not far from civilization on this particular trek, it is still odd to see the reminders. Especially in this area, where civilization at various stages had been almost everywhere, as evidenced by rusting tools and dilapidated buildings from old mining.

An unnamed 9000ft high point is where we encountered the rather perturbed land owner. We were on his land and he wasn’t happy. I couldn’t blame him. I wouldn’t much like people traipsing through my back yard either. And given the beer bottles–and yes, even a bra–I’d rather not imagine what they did on his property.  His several minute rant confirmed the worst of what humanity does in the woods.  Like the mining operator, though, he realized our presence was innocent and we really were just hiking. He wished us well, we apologized profusely, and parted ways. It was a reminder of how not in the wild we were.

The hike from there to the next high peak was longer than we had time for. We picked a sort of high point and decided we’d have to make our apologies to the rules committee. The descent was a precarious hike through some serious mining territory. I wasn’t looking forward to seeing it again.

A few of the mines had cement blocks covering the entry, the wires used to place them cut to ensure they were not moved. Most, however, were just holes that had eventually collapsed into themselves. I couldn’t imagine how ravaged the view must have been at the time. History repeating itself. On a more practical note, it seemed precarious terrain in which to be hiking. I wasn’t sure my Spot would work if I fell into one of the old entrances.

One of dozens of remains of the old mining operations

The rain started as we were still a couple of miles out from the car. There were several gullies to cross and we were hopeful to find the correct one, to avoid any uphill after a long day. To add to the challenge, we were on the edge of the Clear Creek and Idaho Springs map quads, which made it hard to match the terrain to the map.

We eventually found ourselves on a small trail we decided to follow since we were running out of time and the rain wasn’t letting up–we’d take it up with the Rules Committee later–that ended in a road that was the road on which we were parked. We congratulated ourselves on another success endeavor.