“You’re slightly less incompetent than my last partner.”  This adventure was equally the most amazing and most awful experience of my life.

I never thought i would actually climb Denali (Mt McKinley to many), but there I was, at 14,200ft, being berated yet again by my chosen climbing partner.  Our brief relationship reminded me of my first and only marriage: we had both so wanted it so bad that we ignored all warning signs.

But still.  Denali.  Arguably one of the most difficult, most challenging summits on earth.  Its proximity to the artic circle and lack of any significant companions means it gets to make its own weather pattern.  “Don’t like the weather? Wait five minutes.” takes on a deadly significance on Denali.

And one of the most beautiful. Devoid of color and wildlife, its beauty is in its wildness.  Dramatic, rugged peaks.  Blues deeper than I’d ever seen–the sky as well as the ice. Avalanches pouring down all around, most fortunately far away, but at least one close enough to strike absolute terror.  And the crevasses–they seemed to drop all the way to the center of the earth.  Even the seemingly small ones were not to be trivialized, as you never knew what you could not see.

Through a miscommunication, we had not brought the snow baskets for our poles, rendering them worse than useless, since it was still weight we had to carry and slowed us down significantly.  Our first night was not in a standard campsite and my partner began to show the colors I would see over the next ten days.

“Why are you standing there?!” she screamed.

“Because you just gave me five completely different orders and I have no idea what to do first.”  To her credit, she backed down and we got the tent set up.  I set up the stove. She moved it five millimeters to the right.  I unzipped the vestibule. She unzipped it three more millimeters. “You’re going to set everything on fire.”

Each day was the same, but somehow completely different.  Wake up early, the minus thirty degrees doing more than nipping the nose.  Be grateful you really didn’t make camp on a crevasse. Light the stove to start the endless chore of melting water and the hopeless one of warming food. Eat. Pack up everything—it’s amazing the equipment required for a month on a mountain.

Into the rope system, slightly less complicated due to only two of us, but still a reminder that any step could end in a crevasse that one might never leave.  Try to get a head start on the dozen other climbing groups headed up the same day.  Set up camp, melt more snow, eat more cold, half cooked food.

Prior to this trip, I thought I could get along with anyone.  I was so naive.  The more I tried to get along, the more she beat me up.  The first breaking point came on day four when I was already tired of boiling water all. the. freaking. time.  I decided to eat my oatmeal cold.

“IT’S NOT AS NUTRITIOUS COLD. YOU’RE GOING TO RUIN OUR WHOLE TRIP.”

But it’s actually more nutritious not boiling the vitamins…

I know you’re eating Pop Tarts and complaining about my oatmeal not being nutritious enough.

The only time she spoke to me the rest of the day was to lecture me on how MP3 players were ruining mountaineering.  I resisted telling her it was my only salvation against her constant screaming at me. It is really hard to climb a mountain when your partner won’t talk to you. 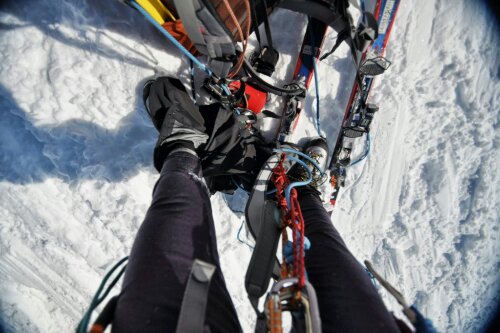 In between, hike. Trudge. On the first few days, this was nothing more than a pleasant cross country ski.  At 11,000ft, the skis were exchanged for crampons and falling became “not an option”, according to my climbing partner. As though there was a choice. I was starting to wish it was.  I started to be disappointed we didn’t set up camp on a crevasse.

The sled containing our gear was much more obedient in the first days.  Now that it mattered, it refused to follow any direction, insisting on heading into any nearby crevasse.  And whether I was leading or following, the disobedience of the sled was entirely my doing, at least in the eyes of my partner.  I was too close.  Too far away. I was managing it too much, not enough.  I wasn’t helping her by pushing it. Why in the hell was I pushing the sled?  The constant criticisms wore on me even more than the fifty pound pack that was my other daily companion. 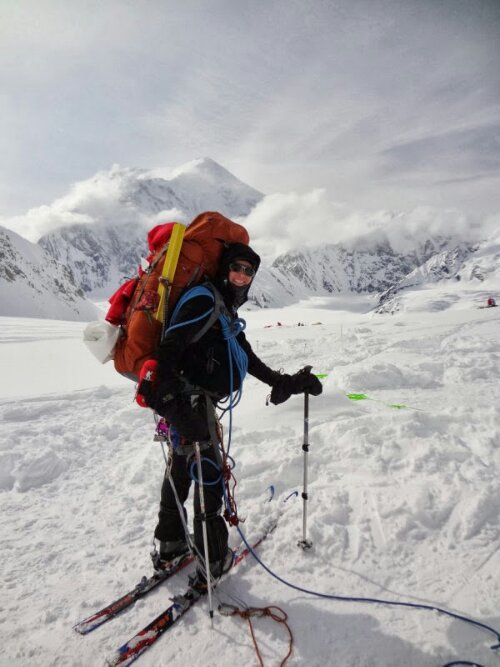 The views opened as we climbed. On the way to 14,200ft, the route from the 7,200ft camp to the 10,000ft camp was visible.  It was amazing.  The specks of tents gave true perspective to our location.  The distance to anything not covered in snow and ice added to that perspective. Mile upon mile of white purity.  White insanity.

Mt Foraker was our nearest neighbor, its ragged edges playing witness to the technical challenges it afforded climbers who dared.  Relative, Denali was truly a walk in the park.  Each morning, we’d watch it for signs of a change in the weather–if the summit wasn’t visible, bad weather would be visiting soon.

Despite the morning chill, we could not have asked for more brilliant weather.  The sun warmed the soul and baked every inch of visible skin.  Everyone had blisters and raw sores.  The sun never truly set, the evening light moving straight into the morning glory.

On our first day, we met an Aussie, solo, on his way out.  He had spent ten days in a tent with his climbing companions, the snow and wind never letting up.  The first sign of calm weather sent him sprinting down the mountain, his climbing partners abandoned.  His expression showed his thoughts on us continuing on. His sagging shoulders and defeated tone told us about his own adventure.

We spent our rest day at 14,200 talking with new friends and watching climbers on the headwall, a two thousand foot nearly vertical wall. It was the one area where fixed ropes are used. Two days prior to our arrival at that camp, a German climber had died at the top of the headwall. His pack had started sliding down the mountain.  He unhooked from his team and followed it two thousand feet down the other side.

We watched as the remaining team members began their return trip.  My heart broke for them, remembering a similar journey I’d made off Kilimajaro.  My climbing partner told me to turn off my “search and rescue brain” and deal with it. I wondered if she had had even a small idea of what I had been through, she would have been more sympathetic, but I knew the answer. She wanted the summit so badly, she would not forgive or acknowledge anything that might interfere. She was so against the idea of failure that she was inevitably setting us up for just that.

The next day found us at that spot. The day had gotten off to yet another rough start.  She’d lectured me about the importance of peeing with one’s pants on, lest one suffer “frost bit butt”.  I’d giggled and received a lecture on how my cavalier attitude was going to get us killed.

Karma had the final say: she soaked her thermals on her first attempt to pee like a guy.

At the top of the wall, we paused to catch our breath and take in yet another breathtaking vista.  I thought about the German.  I wondered about his life, about who and what he left behind.  I was listening to my MP3 player.  A song came on that a dear friend of mine composed, the chorus “Never argue with someone more stupid than you.”  I looked around again, and took a deep breath.

As amazing and awe-inspiring a mountain, as much as I was learning about myself, as challenged as I felt, and as proud as I was to be doing this, the feeling was undeniable.  It wasn’t worth it.

My climbing partner was unforgiving.  We descended mostly unroped, possibly the most dangerous thing you can do on Denali, she angry and frustrated, me guilty and relieved.  The second evening, a storm threatened to keep us tent bound.  She screamed at me for an hour about how we needed to find a way to get along and who the hell was I to take up so much space in the tent.  I sarcastically apologized for being 5’11” to her 5’6″.  Thankfully, the storm passed quickly, and the sun greeted us again in the morning. Luck held, and we caught the last flight off the glacier that afternoon.  We ate dinner in an deeply uncomfortable silence that evening, parting ways the next day, but not before she got in more sarcastic comments about how rich I must be to just be able to change my flight back home while she was just stuck there.

I am appreciative of the opportunity she gave me as much as I am sorry the story doesn’t have a better ending. 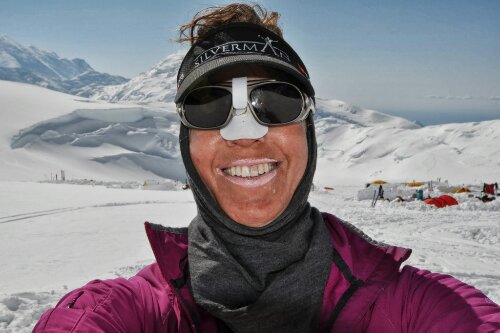