“Don’t worry, I’ll make solid steps.” It wasn’t exactly the solidity of the steps that worried me. It was the fact that the width of the snow onto which we were stepping was more narrow than my feet.

The fact that I have pretty big feet didn’t help my feelings. 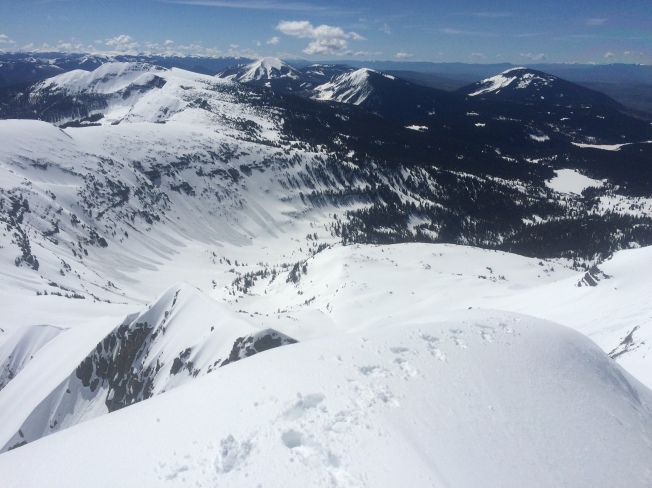 The Life Bus deposited me in Crested Butte for a sunny late May this past summer. Crusty Butt for some. It’s just too beautiful for such a nickname. This was my first times spending any time in CB. I had ridden my bike there several times from Gunnison, with a brief stop for coffee. This weekend was to be spent participating in one of my two passions: mountaineering.

From the Crested Butte website (http://www.crestedbutte-co.gov/): The Town of Crested Butte, fondly referred to as the Gateway to the Elk Mountains, sits at an elevation of 8,885 feet and is located 28 miles north of the City of Gunnison in the County of Gunnison. Crested Butte and the surrounding area was originally home to the Ute Indians. Placer miners were present in the area as early as the 1860’s. The Town of Crested Butte was named because in 1873 a geologist named Ferdinand Hayden was on expedition surveying the Elk Mountains and from the top of what is today known as Teocalli Peak referred to present day Crested Butte Mountain and Gothic Mountain as “the crested buttes.” Howard F. Smith, the founding father of Crested Butte, laid out the Town by 1878. While Smith was originally attracted to the area because of the extensive coal deposits, he first built a smelter and sawmill to service the hard rock mining camps located in the surrounding areas. This established Crested Butte as a major supply center prior to becoming a long-term coal producer. 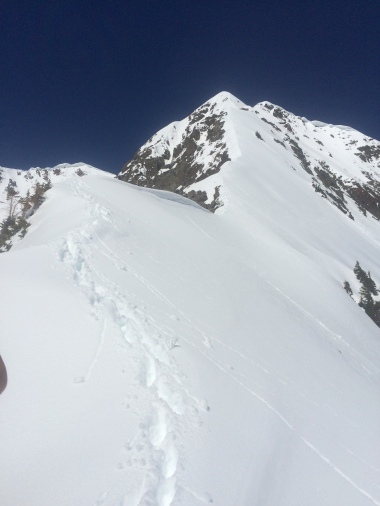 Crested Butte is on my way to Switzerland. It’s not as circuitous as it sounds. I am doing a trail run there near the end of August. As I’ve never been to Europe, I decided to add in some mountain climbing, so started the hunt for a guide. Most guiding agencies design tours that anyone could complete. I wanted something more.

Irwin Guides of Crested Butte ended up being the only guiding service that gave me a personal response to my query–and eventually a personal itinerary. But more on that later.

Thanks to a very odd May–the wettest on record–there was still snow at the end of May to climb. The bad news was that there was too much snow in many places. Crested Butte ended up being the best place to go. Steve of Irwin Guides, my guide for Switzerland, found two really “fun” peaks to play on: Purple Peak and Ruby Peak.
I arrived in CB Friday afternoon and met briefly with Steve to sign all the requisite paperwork: the waivers promising that, if I die, I won’t sue anyone. Always my favorite part of any activity. It’s “just a formality”, but it always gives me pause, especially if the lawyers get creative listing the ways one could die doing said sport.

Since it was early enough in the season, I stayed in the CB Hostel–clean, inexpensive and quiet due to my being the only person there. The open sitting and kitchen area gave me a nice place to read and relax between adventures.
Dinner at the Ginger, a small and delicious Thai restaurant, then back to organize my backpack. Crampons, ice ax, warm jacket, even warmer jacket, food, water, helmet, and several pairs of gloves made up the bulk of it. Couloir climbs can get wet, so lots of dry clothing can save one from a miserable day. Then an early bedtime and seemingly earlier wakeup.
The best part of hiring a guide is having someone’s footsteps to follow in the snow. Snowshoes work on the flatter parts, but the couloir is very steep and crampons are usually necessary. The first person has to “build” the steps that the rest follow. Sometimes, you luck out and someone was there the day before, but often your team is doing it on their own, taking turns as people tire out.
While I am happy to pull my weight, it’s also a matter of balancing strengths. Steve, as a professional guide, is obviously stronger and faster, so for expediency, which can equate to safety in the mountains, he went first and set the steps. Also, as the more experienced (and stronger) one, he could catch my fall. On Purple Peak, Saturday’s goal, I was comfortable enough for the first part to be without the rope.

Which is a huge accomplishment for me. I have learned that, while attached to a rope, I can do almost anything. No rope, and every move feels much more critical. It’s a matter of risk. And it’s hard to explain and I’m not entirely certain the explanation is logical.

Too much risk and the fun factor starts heading to zero. It happened a couple times that day. The first was when the couloir slope became close to vertical. I felt like I was standing on snow instead of solid ground, and all I could picture was the snow falling out from under me. I asked and received the end of a rope and pulled myself up to where Steve was sitting.
The view as I pulled myself over the edge almost literally took my breath away. It looked like a glass slope, the snow untouched across the entire steep surface. It hardly seemed possible that I could step on the snow and not slide down into oblivion. But of course it was possible and I encouraged my shaking limbs to trust the snow and found that the climbing was actually easier for a few moments. I stole glances around to take in the views but my eyes always returned quickly to what was immediately in front of me. Up there, where each step seemed life-or-death, I couldn’t walk and chew bubble gum.

“That far”, however, included a sliver of a knife edge, and short scramble over some rocks (always fun with sharp pointy things on your boots), a slightly wider (albeit longer) knife edge. Steve has a wry sense of humor and it’s often hard to tell when he’s joking. So I wasn’t sure what to think when he told me to throw myself on the opposite of the ridge if he happened to fall. It became a theme for me to worry more about something happening to him than to myself. I was pretty sure he was fine without me. I, however,….
Then the summit.
Halfway there.
Many years ago, I hired a guide to teach my navigation. We had a lot of time to chat, and I asked him what it was like to guide. I always remember his response when I’m with a guide. “Most people think you hire a guide to get you to the summit,” he said. “That’s not why you hire a guide. You hire a guide to get you back to your car.”
Steve and I joked about the figurative ups and downs of mountaineering. How it went so quickly from “Mountaineering is AWESOME!” to “Mountaineering SUCKS!”. Standing on the summit was most definitly an awesome moment, in the true sense of the word: pure awe. It is not just the view, but the effort made to appreciate the view. To overcome fear, to develop new skills, to reach a goal–is there anything more rewarding?

Colorado is where I learned that downhill isn’t necessarily the easy part. It’s sometimes faster, but not always. This time was no exception. It was more my lack of confidence thinly disguised as caution that slowed progress. Now, I was in front, so Steve could still catch my fall, and I jad no footsteps to follow. Snow is not a well understood medium, at least by me. It can hang out in one spot indefinitely or seemingly change its mind and suddenly decide to be elsewhere, in the form of an avalanche. Softer snow can catch your fall–ice-like and you’ll just keep going. I don’t know the difference, so each step is placed with great purpose–the closest I ever come to a life of  purposeful intention.

(all photos of me by Steve Banks)

I don’t know how each step can be an eternity yet get you back to the beginning with no time passing. Already we were back at our stashed snowshoes, then back to the snow machine, the car, and back to town. I bid Steve a short adieu until the morrow and went back to the hostel for a shower and to dry my gear.
It was early in the afternoon, so I was able to get in a little site seeing. Lots of cute shops and friendly people. The majority of my money was spent in the local bookstore and coffee shop, Rumors, my biggest retail weakness. Three books and a large latte later, I went in search of dinner. I found a good American bar and restaurant, The Last Steep, and enjoyed soup and salad for dinner. It was’t a long day, but it had been strenuous, and my appetite hadn’t quite caught up.

Sunday was as breathtaking as the day before. Ruby Peak. Compared to Purple, it was less technical and my comfort level was much higher on the steep terrain. The up was much more “mountaineering is awesome!”, but the down definitely sucked. The snow was soft and thigh-to-waist deep. The sun was warm and I could feel my cheeks burning even as I wiggled my toes in a futile attempt to warm them.

Even with the suckiness, the climb–and now the weekend–were over much too quickly. We drove in silence back to town, me happy at having found the perfect guide for my Switzerland/Italy trip, and excited for our next climb in July. A quick stop at Camp4Coffee for the best cup of coffee in Crested Butte and I was on my way back to reality.